The best KVM (Kernel-based Virtual Machine) challenge I've ever seen! Thanks @shift_crops for giving such great challenge. He released the source code of EscapeMe after the contest as well. 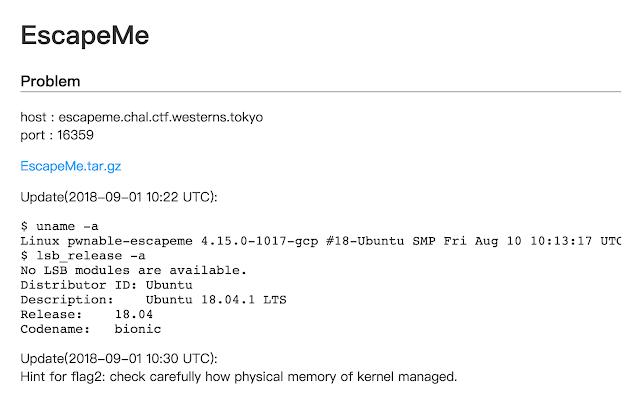 The released files can be found in the author's repo, include 4 binaries, two text files, and one python script. 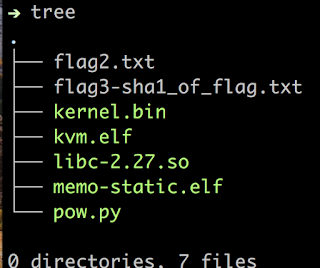 And you can find all my three exploit scripts in my ctf-writeups repo.

To run the challenge, type ./kvm.elf kernel.bin memo-static.elf in shell, and a normal pwn challenge interface will be shown: 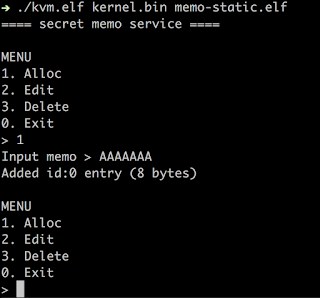 kvm.elf is an emulator (same role as qemu-system), which utilize KVM, the VM implemented inside Linux kernel, for emulating.
kernel.bin implements an extremely tiny kernel, with ability to load a static ELF binary and some syscalls.
memo-static.elf is a normal ELF that implements a simple memo system.

Since the source code has been released in the author's repository, I'll only introduce the vulnerabilities I used instead of the whole challenge.

Well, for this challenge the checksec is meaningless because the "kernel" that executes this binary is implemented in kernel.bin, which actually disable all modern protections on executable files. As a result, there's no ASLR, no NX (all segment is executable), life would be very easy once we can control rip.

Vulnerability
The bug is a cliché. In Alloc we can add a memo (on heap) with data at most 0x28 bytes, after created we have one chance of each memo to Edit, and the edit is implemented as:
If the memo has exactly 0x28 non-null bytes of data, then this read will overflow the size of next chunk.

Exploitation
Though it's an easy heap overflow challenge, the memory allocator is not ptmalloc in glibc that we familiar with. The mechanism of malloc/free here is very similar with ptmalloc, just with tcache and fastbin removed.

We chose to use the unlink attack (don't know if this trick has a name) on forged chunk, see the figure below:
Heap overflow occurs when editing the B chunk, sets the size of next chunk from 0x31 to 0x30, also prepares a properly prev_size (0x50).

Then we Delete(free) the C chunk, it wants to merge with previous (fake) chunk so unlink will be invoked. As a result, *ptr which originally points to heap now points to ptr - 0x18.

After this, we almost have arbitrary write, but it's very limited because we can only write data with the same length on it (recall the implementation of Edit). So we can't directly modify the data on stack (with address 0x7fffffffxx, "longer" than heap address 0x606000). I got stuck for a while and came with this solution:


Remain is just control rip to heap with prepared shellcode, which can read more shellcode and execute it.


Then I was stuck here 😂


Yes I have arbitrary shellcode execution, but where's the flag? Well, because I'm sure we must need code execution to pwn further interfaces (kernel and emulator), so I started to exploit the binary before knowing how to get flag1.

After some reverse engineering, I find there's a special syscall with number 0x10c8 implemented in kernel.bin. The syscall will copy the flag onto a write-only page:

All we need is invoke the syscall, do mprotect to mark the page readable, and print out the content.
The script I used during the contest can be found in my github repo.
Actually I didn't notice the NX is disabled in the meanwhile, so I did ROP to mmap a new page for putting shellcode. That's why the script in the link is much more complex than I described.


My teammates and I spent lots time on finding bugs in the memory-related operations include mmap, munmap and the implementation of MMU, which is totally a wrong strategy 😭

Our target is, of course, arbitrary kernel-level shellcode. And because the self-implemented MMU table marks a bit if the virtual-address can be accessed by user-space, we can't overwrite kernel's code with user-space shellcode.

When user invoking mmap(vaddr, len, perm) syscall, kernel will:
When user invoking munmap(vaddr, len) syscall, kernel will:
There's no bug here - only if the pfree call works as kernel imagines.
In emulator, pfree(addr, len) doesn't care the argument len at all (its function prototype is pfree(void*)).
Therefore, if a memory addr has length 0x2000, then invoke munmap(addr, 0x1000), in kernel only the first page is un-mapped, while in emulator the whole memory will be freed!

To be clearer, see the code before:
After this shellcode being executed, 0x7fff1ffc000 + 0x1000 still can be accessed by user, but it will points to the MMU table entry that paclloced during mapping 0x217000!

Exploitation
Life is extremely easy if we can forge the MMU table. After some properly setting, my 0x217000 maps to physical address 0x0, i.e. the kernel code located at.
Now we only need to invoke read(0, 0x217000+off, len) to overwrite the kernel.

There's an useful hyper-call in emulator that will read a file onto a buffer, use it we can easily read flag2.txt.

The full script for this stage is here.
Flag2: 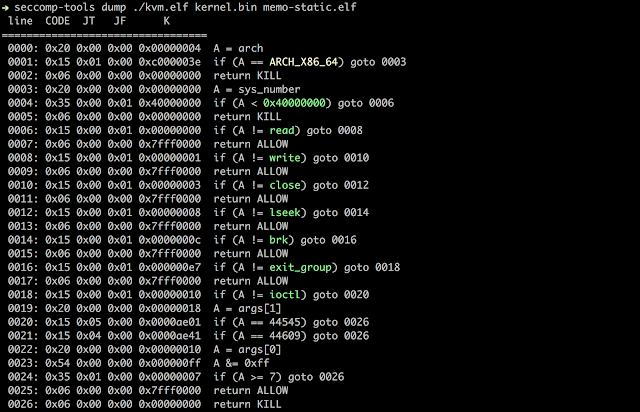 Vulnerability
In EscapeMe2 we already have the ability to forge the MMU table, which is also very useful for this stage. The physical memory records on the MMU table actually are offsets of a mmap-ed (in emulator) page, which is right before the libc-2.27.so's pages. So with forging the MMU table carefully we can access the memory in glibc.

And there's a bug in the seccomp rules, which I found it in 5 minutes after the challenge released. Thanks to my great tool seccomp-tools :D

Seccomp-tools' emulator shows clearly that we can have arbitrary syscall if args[0]&0xff < 7. 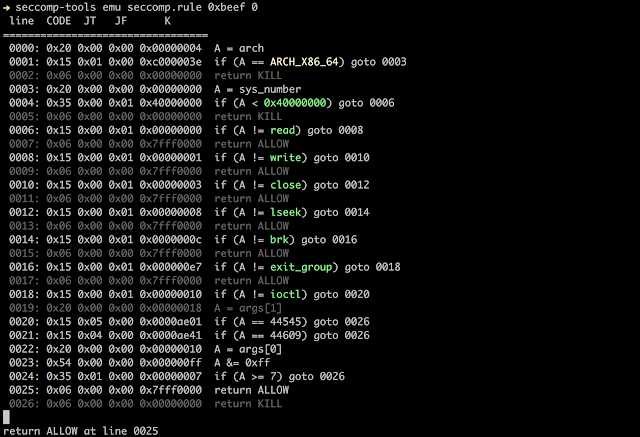 Remain has no new stuff, just pwn it.

Exploitation
With forging MMU table we have arbitrary memory access, but we need to defeat ASLR first. So I read pointers in libc to leak both libc's base and argv address. Then we can write ROP chain on stack.

I used ROP chain that invokes mprotect(stack, 0x3000, 7) and returns to shellcode on stack.

Since the limitation by seccomp, we cannot launch a shell because the further syscall after execve such as open will be forbidden. So I chose to write the ls shellcode to get the filename of flag3:
And got output

Conclusion
This challenge makes me learn a lot about KVM (though its not important in this challenge), and the escaping level by level design is really great and fun.

I will also write a post for noting how KVM works, not only as a note for myself but also (wish to be) a nice article for beginners to know about KVM. Update: comes the KVM introduction post! [Note] Learning KVM - implement your own Linux kernel.

Thanks @shift_crops again for letting me have a great weekend :D